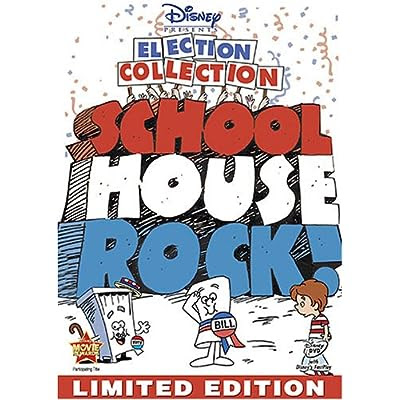 As we're only a few short weeks away from Election Day,pop culture lovers everywhere do need to keep up on current events(especially given a lot of the scary economic news lately)but that doesn't mean you can't do that in a fun way.

Last week,a special "Election Collection" of Schoolhouse Rock came out on DVD,complete with a vote tracking map for kids to use on Election Night. I think it might come in pretty handy for the grownups,too,and perhaps some of the adults in charge of this place should watch a couple of these clips to refresh their memory about how things should be.

One of the best known songs to come from Schoolhouse Rock is "I'm Just A Bill",which ,given what happened the other day,both houses of Congress need to seriously check out before things get any wonkier than they already are:

It's funny when you look back at those cutesy little cartoon lessons and see just how accurate they really were and still are. After all,we are run by a "Three Ring Government":

Also,with the prominence of women in the presidential race this year,it would be good for the younger generation to know more about the "Sufferin' Till Suffrage" their foremothers had to go thru:

If you want a good role model for young girls to follow,you can't do any better than "Interplanet Janet",the solar system miss from a future rock world. Granted, Pluto is no longer considered an official planet anymore,but it will always be one in my heart,thanks to Janet and her comet team:

Race and immigration have been hot button topics cropping up in dinner table talks around the country for awhile now and to cool things off,perhaps folks should serve up some savory stew flavored with unity from "The Great American Melting Pot": 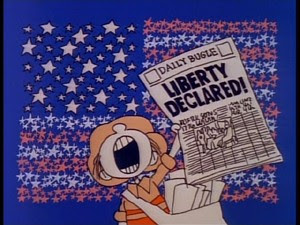 Many people grew up with Schoolhouse Rock(myself included)and while it's not on the level of such 1970's educational classics like The Electric Company,those catchy little tunes did help kids to learn a few things in between Saturday morning cartoons. I wasn't the best math student around but thanks to "Ready or Not,Here I Come",the times table for the number five are still emblazoned on my brain today.

Whether you rent,buy or download a clip or two,Schoolhouse Rock is the perfect pick me up for chasing away the recent news blues and still feeding your mind with some smartly satisfying snacks. One that everyone can agree on(particularly you fans of text messaging)is that taking a ride at "Conjunction Junction" leads to better grammar usage for all:

I remember watching these. I enjoy them a whole lot more than real politcs!