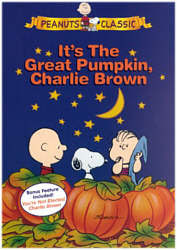 Tonight,ABC will be showing one of the Charlie Brown holiday classics,It's the Great
Pumpkin,Charlie Brown(the first of what I consider the Holy Trinity of holiday specials-the other two being the Charlie Brown Thanksgiving and Christmas shows)and it's also the 40th anniversary of the special. It first premiered in 1966 and is still a fine hallmark of what a good cartoon special should be. 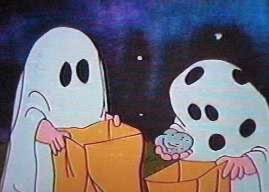 The mistake that many other holiday themed shows make is to get all wrapped up in the theme and neglect the characters. The Great Pumpkin has a beautifully simple premise;Linus believes in a Halloween spirit who gives gifts on All Hallow's Eve and decides to test his faith by waiting out in a "sincere" pumpkin patch for him instead of going along with the typical trick or treat routine with everyone else.

His only ally is Sally(who would be considered a stalker for her romantic persistence thru out the strip)who joins him in the pumpkin patch but winds up turning on him after a long,fruitless vigil. Sad,but on the other hand Charlie Brown goes off with the others for the usual Halloween fanfare and has only a bag of rocks to show for it. Who's to say that one made a better choice over the other here?

The best part of any Peanuts special is Snoopy-he may not have much to say but he always manages to command your attention and be as expressive(or more so)than most human characters,animated or live action. No matter what,it's the Snoopy segments that are the most anticipated parts of the show. Here's a clip of the World War I Flying Ace in action:


I know all the Peanuts specials are on DVD and online but watching them on regular TV seems sacred to me. I still remember the days when the only time you could see certain things was once a year,when the networks chose to put them on. The Wizard of Oz,King Kong(channel 9 in NY used to play it on Thanksgiving Day,with Son of Kong and Mighty Joe Young as a mini monster movie marathon),It's a Wonderful Life and West Side Story(usually played a day or two before Oscar Night)were annual viewing events at my house when I was younger. The Charlie Brown specials are part of my tradition as well and a good portion of many other folks',too.

It's particularly important for kids to see Peanuts,so if there's a child in your life who hasn't watched the Great Pumpkin yet,take full advantage of this prime time opportunity. And for the grown-ups,here's a fun little treat just for you:

Aw, I love that show! Thanks for the heads up.

Don't you also love watching Rudolph, Santa Claus Is Coming to Town, and all those old puppet-animation shows? Nothing wrong with reliving our childhoods every holiday.

Yeah,and the Frosty the Snowman cartoon is a hoot,with that rabbit who gets the best of that goofy magician is great,too!