More than one trick was up their sleeves for the Quickfire challenge on Top Chef Seattle this week,as the contenders were tasked to make a holiday style of dish, that could be sweet or savory,using Truvia. Plus,they had to share one knife amongst the twelve of them during prep.

The guest judge for the QF was Marilyn Hagerty,a lady who writes a food column for a Midwestern newspaper and who received some unexpected internet fame for a review of the Olive Garden she did last year. She seemed like a nice,down to earth type of gal and her feedback on the dishes was well appreciated.

Brooke won this challenge,for an apple crostata with cheese and pine nuts. That won her immunity for the Elimination Challenge,which had the chefs making a family and friends meal for a local celebrity couple.

The couple in question was Anna Faris and Chris Pratt,who are natives of Washington state and stars of screens big and small.

The prize for this round was a new car,which whet the appetites of the chefs and the only major instructions they were given for the food were to incorporate local fare such as fish and game.

Unlike the last Elimination challenge,plenty of good food came out from the kitchen and the judges had no trouble selecting the plates that deserved top honors. However,one chef was a little nervous about his chances due to the special guest star on the judging panel.

Turns out that John used to work for Rick Moonan,who took a spot at the judges' table and was making Rick's recipe for clam chowder that included cockles,crab and sockeye salmon.

He was really freaked upon seeing Rick but his fears were for naught. Rick loved the chowder,along with the rest of the judges and the hosts of the party as well.

Joining him in the winner's circle was Sheldon,who chose to make a dish that he liked to eat whenever he goes home to Hawaii.

His braised pork belly with seared scallop and rice congee was a real hit that hit the right spot with everyone. Good for him!

It was a double dose of good luck for Brooke,as she won the car for her lamb stuffed squid served with black rice and coconut milk.

Anna Faris and Chris Pratt raved about the dish,with the judges practically swooning
over each bite. Brooke's now a top contender in this game,so she needs to watch her back.

Hitting bottom yet again was Josh,for his roast pork shoulder which needed seasoning badly. Even his side dishes of corn puree and apple fennel succotash didn't add enough flavor to the meat.

To make matters worse,Josh owns a restaurant called The Divine Swine and tried to joke about his problems with pork during the challenges. Padma kind of shot him down hard there,saying maybe he shouldn't cook it anymore on the show-ouch!

Also struggling was Danyele,who feels intimidated consistently. No one is giving her a hard time here,so this is all about nerves on her part. Judge Tom suggested that she stop worrying and just do her own thing.

The boar chops that she cooked were very thin,which made Danyele extra tense while cooking them and they turned out both over and under done in parts. She needs to get her head in the game right quick there.

Sent off to pack her knives,however,was Eliza. She sliced her elk very thin in order to avoid chewiness but the whole plate was rather bland.

Despite the huckleberry port sauce,both the meat and the sides of polenta and carrots tasted under seasoned,putting the judges off their palates. Maybe Eliza will fare better in Last Chance Kitchen and with any luck,Danyele won't have to join her there. 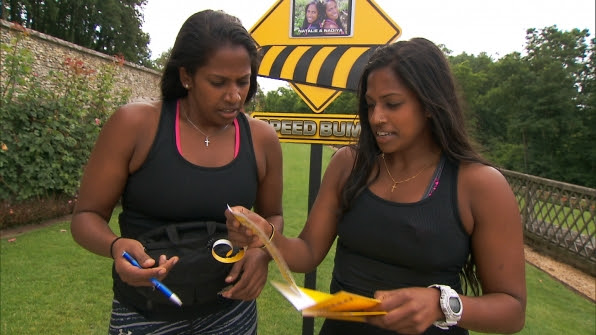 It was a tense two hour finale of The Amazing Race,as Team Twinnie was determined to kick the Beekman boys out of the running. They openly insisted to the others to ditch Josh and Brent as soon as possible,even right out on the road during the next to last leg in France.

Part of that was due to the girls having a Speed Bump(lacing up a ladies' corset) to deal with before heading off to the Detour.

As fate would have it,Team Twinnie met up with the Beekmans at a challenge to prepare food for a pack of bloodhounds. Natalie and Nadiya tried to mess with them verbally but the fellas were well armed in that department: 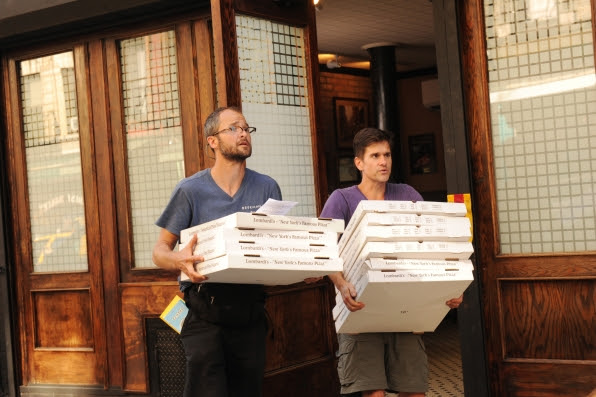 By the end of the leg,the girls were out and the Beekmans were in,along with Trey and Lexi and Team Chippendale. All three groups then headed out to New York for the last leg,starting at Coney Island to find their clue.

It took awhile for all of them to figure out where to go but eventually they found their way forward. Josh and Brent were a little waylaid by the pizza delivery challenge,due to bringing the wrong pizzas to two of their locations.

Their do-over gave the lagging behind James and Jaymes a chance to catch up,not to mention a keg up for Trey and Lexi: 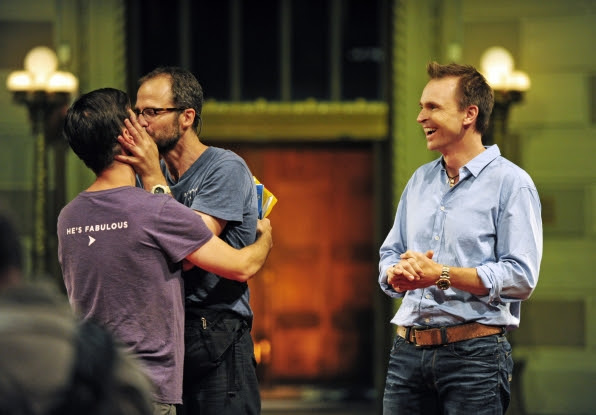 Things all evened out at the last Road Block,where each team had to match the right terms for "hello" and "goodbye" from the countries they had gone to during the race. Josh and Brent finished up first and became the winners of this season of TAR.

It was great to see these guys,they ran a good race throughout. Granted,I would have been happy for the Chippendale boys,too,but Josh and Brent were super nice to folks like Abbie and Ryan when they were at the back of the pack,which earned them that extra good karma for the final leg.

Congratulations,Beekman boys and good luck to you both with your farm. It was also super sweet to see that playing the game in a true sportsmanlike manner can pay off:

The Vampire Diaries will be airing their last episode for 2012 tonight,to start up again sometime after New Year's and it should be quite a cliffhanger.

Between Tyler leading the hybrids in a revolt against Klaus and Elena trying to help Jeremy with his vampire killing urges,things are bound to get dicey.What is most disconcerting is the trust being placed in Professor Shane,who has his own agenda regarding the Five,the weres and Bonnie to boot.

At least Damon's trouble radar is beeping yet hopefully he'll be able to step in at the right time to prevent any real damage(something that Damon is not exactly known for):

THE NEXT IRON CHEF: The competition headed to Vegas,where a weird food pairing challenge tested the chefs mightily indeed. Our remaining ladies are still riding high but the upcoming buffet challenge could be a maker and a breaker there: