The Quickfire Challenge on Top Chef Seattle this week took everyone to market at the Pike Place Market,to be more specific. Teams of two were formed and each one had to make a breakfast dish for the vendors. The big catch was,it had to be on a stick(I hear a Jeff Dunham joke calling!).

Most of the stick served offerings went over well,but the winners of this challenge were Sheldon and Bart.

They managed to make an egg sandwich that turned out great despite the trouble they had with their panini press. Their team received double immunity,pretty sweet!

For the Elimination challenge,everyone stayed in their teams and drew knives to see what special artisan ingredient needed to be highlighted in their dishes for the judges and local makers of those products.

Ten grand was on the line for the winner,however the end results were so poorly done that Judge Tom took away the cash prize and announced that there would be another double elim.

Wow,I haven't seen him that mad since,...well mad enough to cancel the prize money there,that is a first,I do believe!

While the judges couldn't select a winner,they had no trouble putting three teams up on the chopping block for the loser honors.

One of those teams was Stefan and Brooke,who made a glazed duck with cabbage,using the rose petal jelly they had been given for the glaze. Unfortunately,the bird was overcooked and the cabbage only enhanced the sweetness of the jelly,making the entire plate hard to eat.

Next up was Josh and John,who had to work truffle popcorn into their dish. They went with pork medallions on top of popcorn seasoned grits.

The grits were bland and mushy,plus the pork was not properly cooked, It was a real disappointment and one that could've been easily remedied to boot.

The main problem with this team(and a lot of the others)is that both members were way too compromising towards each other. Josh did not want to cook the pork in medallions,for example, but went with John's suggestion in order to avoid a fight.

Neither one of these guys like each other and I can see not wanting to argue over something that would get in the way of completing the task. Yet,in this case,that strained harmony was reflected in the food and nearly cost them the game.

Luckily for them all,CJ and Tyler's display of spicy pickles was less than appetizing. At CJ's insistence,they made a pork hamburger served on a crumpet with some fried pickles on top. Tyler wanted to try something different but CJ kept saying that Judge Tom would prefer a simpler dish. Well,you were wrong on that,now weren't you,buddy?

The crumpet was a terrible choice of bun,becoming a spongy mess and the fried pickles weren't even done well(the breading flaked off). Worst of all,CJ ,for some strange reason of his own,tried to throw another team under the bus whose dish wasn't even up for elimination!

Granted,the chocolate curry coconut mousse that Lizzie and Danyele made wasn't up to snuff but (a)the judges obviously didn't think it was bad enough to send them home and (b)what ever did those girls do to you,CJ,that made you call them out like that? I don't get it,not at all.

Well,good luck in Last Chance Kitchen,guys. You're going to need it,what with Kuniko cleaning some major house there( way to go,Kuniko!). 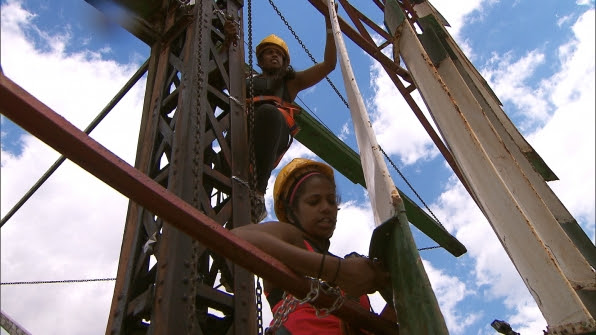 We came very close to saying so long to Team Twinnie(Natalie and Nadiya)on The Amazing Race,as this leg in Spain caught them flat footed.

They had trouble driving their team car and floated quickly to the back of the pack as things progressed. As they reached the Pit Stop,I was hoping to see Phil send them home but alas,that was not to be.

The girls had one last bit of luck,as this turned out to be a non-elimination leg.*Sigh* Sorry,folks but Team Twinnie has grown more annoying to me over time,not to mention their scheming and stealing of Team Rocker's money(in cahoots with Trey and Lexi,still wanting to see you go down for that!).

The two hour finale airs this weekend and I'm rooting for either the Beekman boys or Team Chippendale to win. The twins will have to face a Speed Bump on the next leg,so maybe this is when their bad karma starts to truly kick in:

Elena's new love connection with Damon on The Vampire Diaries is being given a new direction,as Caroline and Stefan slowly realize that she's acting under the influence of a sire bond(similar to Klaus and his hybrids).

Damon doesn't seem to have intentionally caused this to happen but is in no hurry to end it,obviously. While this sounds like a bit of plot contrivance in order to bring Elena back to Stefan,there is some solid basis for it.

After all,with Tyler and his werewolf friends determined to break their ties to Klaus(which has a secret sinister purpose connected to that shady professor Shane who's all into Bonnie),it stands to reason that Elena will need some of that assistance to break away from Damon's amorous influence. Perhaps a girls night out can clear her head just as well,then again,maybe not:

COMIC BOOK MEN: With their second season finished,look for the Secret Stash gang to return in January on a new night and time. Say what you will about comic book fans,it's fun and funny to see them light up with that glow of childhood innocence when the likes of Stan Lee stops by or a toy from the past turns up at the counter: