Attack of the cutesy robots on film

The big talk around the summer movie campfire this weekend is all about Wall-E,Pixar's new computer animated film about the last robot on Earth who finds a friend in the form of a research probe that's lost its way(pretty meta there,if you think about it).

While Wall-E's been getting rave reviews so far(and will no doubt haul in a tidy little sum at the box office)and is probably a good film,let's not forget that this whole genre of "robots being as human as us,in a nice way" is not a radical new concept here.

Remember Short Circuit,folks? That quirky little comedy from the '80s that had Steve Guttenberg and Ally Sheedy trying to protect Johnny Number 5,a robot meant for military use,from the clutches of the government? That movie did so well,it even had a sequel(without Guttenberg and Sheedy,of course). People just couldn't get enough of that goofy hunk of junk and the robot was a fun character,too.

Most of the best scenes from Short Circuit were the fish out of water adapting all too well by example into the human world(the mold for such hijinks being set by E.T.)like Ally Sheedy booging down in her living room,thanks to Saturday Night Fever being on TV and Johnny No.5 being a quick learner:

Short Circuit received some praise and a few jeers from critics but audiences took to it well enough. You could argue that that having the theme song sung by El Debarge was a help or a hindrance there:

There are plenty of examples of the cutesy robot film going haywire but some of the
clunkers are rather interesting failures. It's hard to find a copy of Heartbeeps these days but I'm sure that someone will try to revive it on DVD at some point.

Andy Kaufman and Bernadette Peters play a couple of outdated robo-servants who fall in love and run off together to create their own little family out of spare parts. As is the case in these movies,the humans in charge won't allow that and attempt to hunt them down,with the aid of a robot crime enforcer. The movie was deemed a major flop but there's a bit of a cult film following for it:

I haven't seen this movie in years and in thinking about it now,I'm wondering"What ever happened to Ann Magnuson?" She was so cool as the ad agency gal who is assigned to work up a PR campaign for John Malkovich's robot double in Making Mr. Right,I totally wanted to be her.

Making Mr. Right is a bit more adult in it's subject matter but done charmingly well and it's a truly sweet romantic comedy,with an unusual happy ending to say the least. Folks credit Malkovich with innovative performances for flicks like Being John Malkovich and In The Line of Fire(to name a few)but the seeds for those future great roles were planted in movies like this: 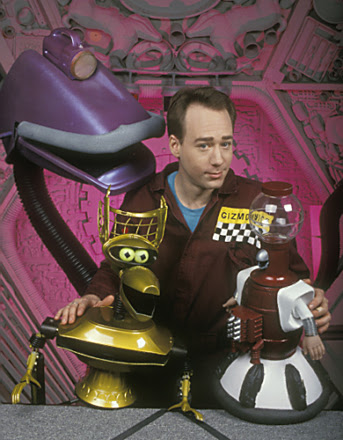 The cutest robots of all time made only one official movie together but they sat thru more than their share of godawful ones. Hands down,Tom Servo and Crow T. Robot of Mystery Science Theater 3000(I liked Gypsy,too) gave many film critics a run for their money and matched their human counterparts for great movie mockery moments.

So,Wall-E may make a big splash on his first big weekend at the multiplex,he has a lot to live up to and is in good company. To close this out,let's look at Tom Servo and Crow at the movies:

Every clip I've seen of Wall-E has made me laugh so far, I really hope they're not just showing the best parts and the whole movie is like that. Is it just me or does he look like a robot ET?

It's not just you,LadyTink-Wall-E is like a robo-doppleganger for E.T.(now that would be an interesting movie to see). Glad you liked the clips:)