The Top Ten Things I learned from The Other Boleyn Girl

The film adaptation of Philippa Gregory's best selling novel,The Other Boleyn Girl, made it's debut on DVD last week and I took a look at it over the weekend.

For those unfamiliar with this movie,it's the tale of Anne Boleyn(Natalie Portman)and her doomed relationship with Henry the VIII(Eric Bana)but with a new twist;seems that Anne had a younger sister named Mary(Scarlet Johannson)who caught the king's eye first and was not only his mistress for a brief time but the mother of his illegitimate children as well.

The Boleyn family(goaded by their uncle,the Duke of Norfolk)was more than ready to pimp out the girls all in the name of gaining a more prominent position but Anne's ambition caused rifts between her family,her sister and the entire country as she
wheedled her way onto the throne as Queen. Mary,despite the viciousness and petty
jealousies she received from Anne over the years,tried to help her sister when the tide turned violently against her but to no avail.

The number of strong female performances in this film could easily fill up several Best Actress categories,from Ana Torrent as Catherine of Aragon,to Kristin Scott Thomas as Lady Elizabeth Boleyn to the gals playing the Boleyn girls themselves. Eric Bana also did well here as Henry,portraying him in his younger years as a man lead by his appetites and being pushed to the breaking point by the lure of Anne's denials. 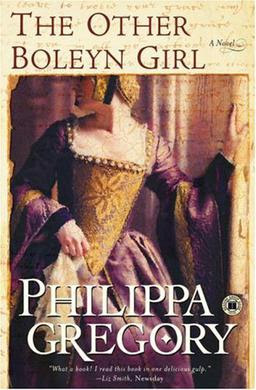 Since the source material is based on historical fiction(which was well researched by the author),only the nit pickiest of history buffs could find much fault in the details. While certain small plot points were not as fully developed as they were in the novel(such as Mary's marriage and the death of her first husband),the main focus and draw of the story is the rivalry of Anne and Mary for the love of Henry.

The Other Boleyn Girl on film is just as entertaining as it was on page,and reading the book either before or after watching the movie will only increase your pleasure in drinking in this timeless tale of love,betrayal and the dangers of taking your whims way too far. It's also quite a learning experience as my Top Ten list of OBG
lessons will show:

10) A good way to intrigue a man's interest is by letting him know what things you both share in common,like horse riding techniques for example:

9) An invitation to Court is not something that is asked of you;it is a summons.

8) The King's bedchamber is for more than just sleeping:

7) If a king asks you to point out who in the room is a great man,you would be wise to look in his direction for the answer:

6) Love is of no value without power or position.

5) The ladies of the French court can teach you how to get what you want from men;not by stamping your feet but by letting them think they are in charge.

4) By demanding that a king ditch his queen and ship off his baby momma to the country right after giving birth to a son,you'd better be prepared to give him more than hope:

2) Lofty ambitions combined with desperate attempts to reach and keep them can literally cost you your head.

1) Being sisters and therefore born to be rivals is truly a matter of opinion:

I'm kind of hestitant about watching the movie. I really loved the book but I'm having doubts! I hope I'm just being ridiculous.

The movie is good,LadyTink. To me,it's always a good sign when the author is happy with the film version of their book and Gregory's been rather pleased with this one(there was also a British TV movie adaptation of OBG,not sure if it's available in the US).

I know this is really late after your review, but I thought you ought to know--actually, the history is dreadful and anyone who knows anything about the time can point out literally dozens of errors in the movie, not least the ending. The author claims it's well researched; actual authorities on the era disagree intensely.

I get what you're saying,Gillianren,but since the book on which it's based on is fiction(yes,historical fiction,but even so...),I'm more than willing to give it some leeway.

Thanks for reading my write-up,tho-there's no time limit on interest:)