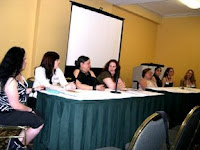 At last Saturday's Big Apple Con(which felt more like the Baked Apple Con,due to the intense heat wave affecting NYC),my sister made her first appearance as a panelist in a Women of Comics discussion that was sponsored by CAG(Comic Artist's Guild)

Joining my sis(who also appeared at the CAG table to sign copies of her book,A List of Grievances and promote her other works)on the panel were several up and coming female comic book artists that included Shawnti Therrien,Michele St. Martin,Liz Ortiz,Lindsey Kraemer, Michele Witchipoo and Susan Soares,the membership coordinator of CAG.

Moderated by Rachel Kadushin,the panel talked about a number of topics such as how women artists are perceived by readers and in the industry, should their work be geared to a specific target audience and what influences inspired them to pursue their artistic dreams. 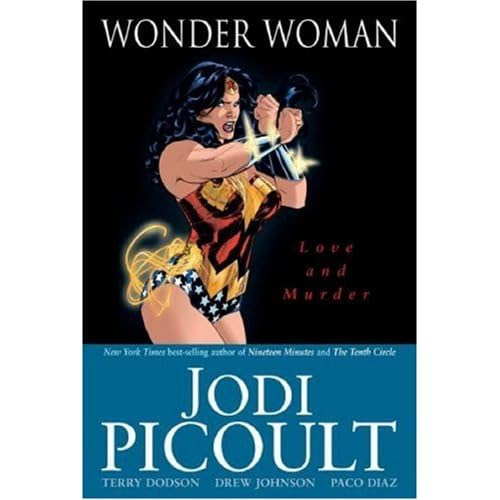 The target audience question was best answered by Michele Witchipoo,who said that"Art is for everyone." and talked about how she was directly inspired by Jamie Hernandez's Love and Rockets.

Michele St John spoke about how her father was the one who introduced her to the world of art and her early exposure to R. Crumb's Mr. Natural was a real eye opener. Susan Soares mentioned that seeing a best selling author like Jodi Picoult write for such an iconic figure like Wonder Woman was encouraging to her.

My sis talked about how not only was she inspired by the comic strips of Bill Watterson and Patrick McDonnell,but by watching my brother and his friends(yes,we have a brother)interact with each other during their teen years. Listening to all of these smart,funny and talented women share their common goals and dreams with one another was a major highlight for me that day and one that I'm sure the audience assembled appreciated as well.

It was also a good outing for the Comic Artist's Guild,which is celebrating their seventh anniversary. CAG is a great group of folks who both support and nurture fellow illustrators, writers and creators of comic book art. I personally feel that my sister is very fortunate to have fallen in with such a lively crew and have high hopes for this thriving new generation of artists. Not to mention a few good laughs along the way: