The other side of Ray Bradbury's pop culture coin 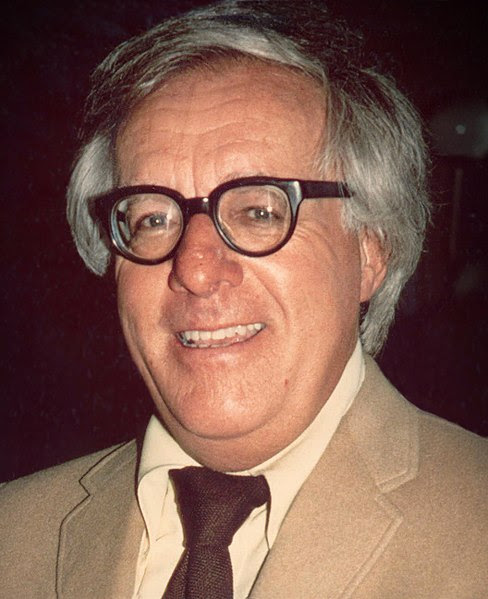 Readers worldwide are mourning the loss of Ray Bradbury,the brilliant science fiction/fantasy writer who passed away earlier this week. Mr. Bradbury has been cited as the inspiration for many authors such as Stephen King and Neil Gaiman and his novels such as Fahrenheit 451 are considered some of the best genre literature of the modern age.

While many of the tributes to his life and times will rightly include his best known works,I thought it might be interesting to check out some of his other film and TV adaptations that either drew many folks to read his books or charmed those already familiar with them: 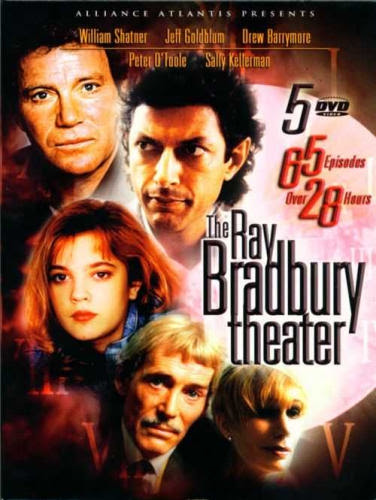 Bradbury's volumes of short stories made him the ideal writer for any anthology and during the 1980s,HBO started a series entitled The Ray Bradbury Theater which had the man himself on board as host. It ran on HBO for two seasons and then switched to the USA network until 1992.

The casts of these episodes included a number of interesting faces like Peter O'Toole("The Banshee"),William Shatner("The Playground")and Hal Linden("Mars is Heaven"). Some of the stories had been partly taken from Bradbury's novels and a few had been adapted prior but this was a wonderful showcase for more than one talent: 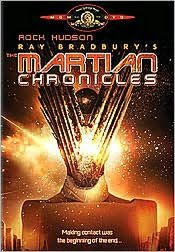 Speaking of prior versions,NBC aired a mini series based on Bradbury's collection of short stories called The Martian Chronicles back in 1980 with
a screenplay by Bradbury contemporary Richard Matheson. It was quite an ambitious undertaking for a major TV network to bring a big science fiction saga to life on screen.

The interlocking tale told of the repeated attempts by Earth men to colonize Mars,first with resistance from the original inhabitants and then
later at the expense of any possible life on Earth. Bradbury wasn't impressed much by the mini series,calling it "boring" yet it did attract a good number of viewers who become readers of the original book like me:

Bradbury was a noted screenwriter,who penned episodes of The Twilight Zone,Alfred Hitchcock Presents as well as adaptations of his own work such as The Electric Grandmother,Halloween Tree and The Wonderful Ice Cream Suit. Film buffs,however,are well aware of his collaboration with director John Huston for a major motion picture version of the classic American novel,Moby Dick,back in 1956.

Huston and Bradbury had horrible clashes during the production that provided Bradbury with material for a novel and a couple of short stories about the experience. Despite their infighting,the movie is considered an artistic success(it failed to make back it's increased budget upon first release)and many film makers consider it to be highly influential.

Part of the reason for that later appreciation is due to Bradbury using as much of Melville's florid language as possible to keep the dialogue authentic and true to the book:

Flash forward to 1983,when Disney decided to turn Bradbury's dark novel, Something Wicked This Way Comes,into a live action film. That was seen as a bit of departure from their regular family fare in that forum and while it didn't do big business at the box office,SWTWC does have a nice little cult following.

It's more of a horror story,as a sinister carnival visits a small town with plans to lure some of the more vulnerable locals into their clutches. A pair of young boys stumble onto this devious den of delights and try to stop their reign of terror but the only adult who believes them is Will Holloway(Jason Robards),the aged father of one of the boys.

The elder Holloway happens to be a librarian and therefore some of the best sequences take place at the library,including a dangerous showdown with Mr. Dark(Jonathan Pryce),the ringmaster of this creepy circus:

Ray Bradbury was a remarkable man and a great writer,whose like we may not see again. His legacy goes beyond the wonderful stories that came out of his head,however,as his thoughts about the creative process and love of books should provide plenty of food for thought to future authors and scholars. We sing the body electric because of you,Mr. Bradbury. Fare thee well: