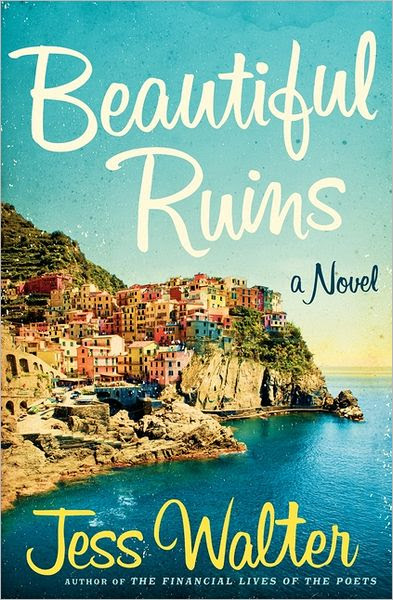 The action in Jess Walter's new novel,Beautiful Ruins,takes place in various locations but it's starting point is in Porto Vergogna, a small,nearly forgotten seaside village on the coast of Italy in 1962.

Pasquale Tursi ,a young man who has returned home to run his family's hotel after the death of his father,has high hopes in turning Porto Vergogna into a resort area fit for American tourists and spends his days trying to create a beach on the rocky shore,along with plans for a tennis court atop of a cliffside clearing.

One fateful day,a boat brings a lovely blonde American girl to his hotel and she insists that her reservation is not a mistake. Her name is Dee Moray and that she is an actress who is about to make her big film debut in the Elizabeth Taylor epic,Cleopatra:

Dee's time on the movie has been cut short,due to an illness that may be cancer. She's expecting to go to Switzerland for treatment but is waiting for
a certain man to join her at the hotel first. That wait becomes long and Pasquale becomes concerned over her health,as well as touched by her forlorn nature and seeks out help from a PR man on the film named Michael Deane.

Decades later,a much older Pasquale is in Hollywood and arrives at the offices of now aging mogul Michael Deane. He stumbles into a open pitch session run by Deane's disillusioned assistant Claire and winds up attending with Shane,a wannabe script writer that happens to speak a bit of Italian. At first,Claire believes that Pasquale's story is another pitch but soon realizes that his quest to find Dee Moray is all too real:

That's all of the plot I'm going to give to you,otherwise you would be deprived of the great joy of discovering the delights of this book for yourself. I will say that Dee's condition while staying in Porto Vergogna is not due to cancer but is connected with the filming of Cleopatra in a major way.

The story goes back and forth in time while making a few necessary pit stops for other characters whose purpose in the narrative becomes clearer as events and people in this well crafted tale reach their intended rendezvous.

The most haunting character out of the ensemble arranged on the pages is Dee Moray,who changes names and goals during the course of her life and for reasons that are deeply personal yet appear remote to outsiders. The choices that she makes wind up affecting so many lives around her and yet the author does not make Dee either an angel or a devil,rather he displays this vibrant woman in all of her human glory. Dee's emotional journey is not the only one taken here but it is a very vital component to the ultimate outcome of the novel:

Other hidden gems in Beautiful Ruins include a bizarre pitch for an epic film about the Donner Party,the opening chapter of a war novel and an early draft of a hideous Hollywood insider memoir. Jess Walter balances these seemingly off the wall side notes with the ever growing story and does it with the grace and ease of a master juggler.

He also adds in whimsy that never turns cloying,melodrama that hits the right points and avoids entering maudlin country,plus several heartbreaking moments that are a sad yet wonderful joy to behold.This is my first time in reading any of Walter's work(his best known novel is The Financial Lives of Poets)and this book is said to be a change of pace for him. Maybe so,but I have a feeling that when I check out the rest of his books,I won't be disappointed at all. Beautiful Ruins is definitely going to make my Best of the Year list for 2012.

Beautiful Ruins will be out and about on June 12 and it's the best mental vacation you'll take this season. This enticing story of worlds colliding and attempting to reconnect invites the reader to do more than sit back and watch,it demands that you climb on stage and join in the raucous song of life being performed right then and there: