The second episode of this season's True Blood had Sookie and Lafayette doing the best they could to calm down new risen vampire Tara,without much help from Pam(other than commanding her new charge not to feed on them).

Tara's feral state lasted for at least a day,with Sookie seeking a little home protection and Lafayette having second thoughts about bringing his beloved cousin back to life this way. Those regrets and precautions were all well and good,but there is no turning back now:

Meanwhile,Eric and Bill are prisoners of the Vampire Authority,who believe that our blood drinking boys may be part of an extremist group called the Sauginistas. The true reasons for not speaking up involve protecting not only Sookie but Eric's vampire sister Nora(they had the same Maker),who didn't want to expose her connection to her blood brother.

The three of them were brought before the inner circle,where Roman(an excellent evil turn by Christopher Meloni)opened up the debate on whether or not to give the guys the True Death. The vote was not going their way but Bill was smart enough to offer them up as bait to capture Russell,who has emerged from his concrete grave.

That bought them some time,which I hope they use wisely as Roman is most definitely not playing around about ending them both here:

The star challenge on The Next Food Network Star this week was for each team to run a stand in a mall food court. They were given a certain type of cuisine to prepare,with Team Giada thinking they had a smooth ride with Mexican food,since Martika specializes in that.

However,Linkie was in trouble from minute one,when she confessed to the group that she had "no idea what they serve in Mexico for dessert." Seriously? Even I know about flan,for goodness sake!

The challenge was given an Iron Chef level by guest judge Geoffrey Zakarian,who brought in the secret ingredient that at least one of the contenders had to put in their dish:chicken livers,yum!

The team that did the best work was Alton Brown's(about time there!)and they won this round,which meant that one person from Bobby's team and one from Giada's had to face off on the Producer's challenge to stay in the game.

It was between Nikki and Linkie,with Nikki softening up her "Girl on Grill" approach by being "The Grill Next Door" and Linkie making a solid dish but fumbling on her camera presentation. Team Giada lost another member but I don't think their mentor minds all that much. From the grimaces she kept throwing in Linkie's direction,you could tell that she wasn't thrilled with her(Giada is not subtle in her body language at all).

Next week,the remaining teams have to meet the press and hopefully they handle that better than say a certain 30 Rock star(what a maroon,in the worst sense of the word): 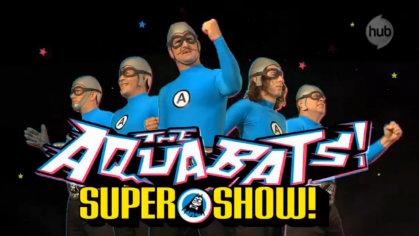 One of my favorite new guilty pleasures has been to watch The Aquabats!Super Show! on the Hub network. Yes,this is a kid's show with a mixture of live action and animation that follows the zany adventures of a crime fighting rock band.

The band has actually been around for quite some time and garnered a cult audience and plans to turn their act into a TV show have gone on for several years. It was well worth the wait,as this series is a nice throwback to the days of Sid and Marty Kroft,with it's own unique touches of wacky whimsy.

The first season of Aquabats has finished up already,but you should be able to catch it in reruns over the summer. Look for it and taste the burger rain:

JERSEY SHORE SHARK ATTACK: Caught this little gem on the SyFy channel a couple of weeks ago and it is as awfully awesome as you might expect. Best line of dialogue:"Joey Fatone just got eaten by a shark!"-priceless: