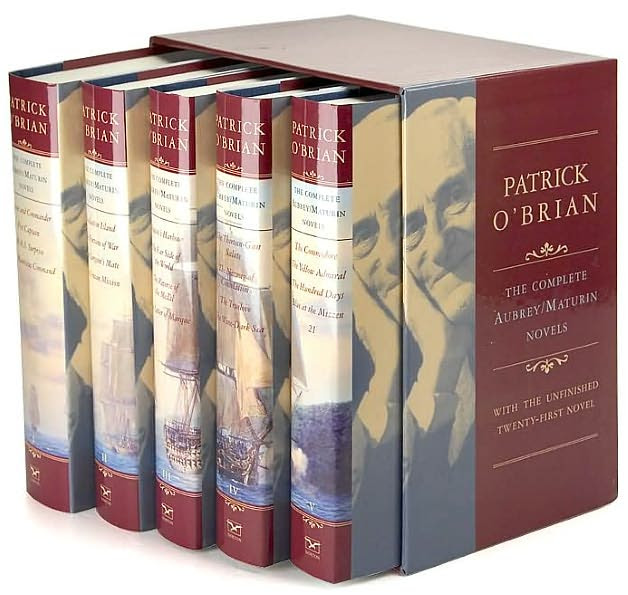 Some years ago,I treated myself to a box set of Patrick O'Brian's complete series of Aubrey-Maturin novels,which numbers twenty books in all(plus his unfinished book aptly titled 21)in five hardcover volumes. It was,even with the discount pricing,one of the most expensive book purchases I had ever made.

Part of the reason that I ventured to pick up this set was it's stylish look(not to mention being a sucker for sewn into the binding ribbon place holders)but also due to the high level of acclaim that these tales of the British navy set during the era of the Napoleonic wars have garnered from both readers and critics alike over the years.

The series first began in the early seventies in England and later came over to America around 1989,with Master and Commander as it's starting point,the book that I am now finally reading in earnest.

Why the long delay? Well,for one thing I do tend to shop for books the way other women shop for shoes;a quick impulsive mood can lead to a lot of piled up goods that have only been tried once or twice before being left aside for another time and/or given away.

I've worked on that behavior since then and have had some success there,yet refused to give up this large set of books that were barely touched. Such a notion was even harder to consider after seeing the movie Master and Commander:The Far Side of the World,which is based on several of the novels and starred Russell Crowe as gruff yet gregarious Captain Jack Aubrey whose friendship with the stiff and seemingly starched Doctor Stephen Maturin(played by Paul Bettany) has been the driving focal point of the series:

That film was incredibly captivating and my memories of sitting in the movie theater with an entire audience for over two hours that kept quiet enough to pay attention to every detail furthered my resolve to keep the entire set.

The biggest attraction,however,was the Jane Austen connection. O'Brian cited her as one of his inspirations,which makes sense given that the novels are set during her time period. Jane had two brothers in the Navy,whose presence could be seen in at least two of her novels,Persuasion and Mansfield Park.

The main love interest in Persuasion is Captain Wentworth, a man who,according to one character,"had little but himself to recommend him" to a young Anne Eliot. After being reluctantly rejected by his lady love,Wentworth went to sea and made his fortune,returning home to now find a suitable wife. Despite his many prospects,Anne is still his first choice yet the two of them take their time in rediscovering those former affections.

The naval influence is strong in Persuasion,with many of the best people in the story either in uniform or connected by marriage to a man in service. Since it was Austen's last completed novel,it was good of her to pay such fine tribute to the kind of good natured folks that her brothers no doubt brought into her life and enlivened theirs:

The same can not be quite said about the appearance of naval folk in her earlier novel,Mansfield Park. Although Fanny's brother William is a decent sort of fellow who appeared to be maturing into a good man via his time in service,his promotion in the ranks is due to the not entirely selfless influence of Henry Crawford,whose uncle is an Admiral with moral habits that caused Henry's jaded sister Mary to find better living arrangements acceptable for a single young lady of means.

During Fanny's visit to her decidedly lower income family in Portsmouth,Henry did pay a visit to the Price household that included running into her former seaman father,a man who clearly couldn't hold his liquor for too long.

Seeing where Fanny's birth family came from and currently was in life caused a hint of second thoughts regarding his courtship of her,in my opinion,and may have been a motivating factor in Henry's renewal of interest in courting Fanny's now married cousin Mariah. Mansfield Park is not meant to be disparaging of the Navy but one must take the bitter with the sweet in most situations,including military service and it's affects on all concerned:

Knowledge of Austen is helpful in trending these waters,however I suspect that my copy of Jane Austen and the Navy will be even more useful in understanding the nautical terminology and customs of the day.

I've taken to reading a little bit each morning(a habit that I've begun of recently and beta tested with a pair of rereads)and so far,the story has kept me going back for more.

It will take a good long while before I reach the end of this entire series but my confidence in doing so is much higher than ever it was. When I do reach the true end of this seafaring saga,it will be with the joy of listening to a fabulous musical number conclude with a note of truly earned triumph(or an extended reading merit badge,which ever comes first):

Hi!, I write from Italy. Did you ever read all the books? I'm reading the 10th on my kindle and I love them. (And my housband doesn't understand me!!! ;) )
Thanks for the interesting post

HI,Lucia, nice to hear from you! So far, I have read the first two books(M&C and Post Captain) in the series but not giving up on completing the rest someday.