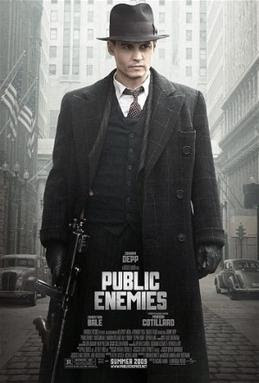 One of the much touted summer movies this season,Public Enemies takes a seriously stylized look at the legend of John Dillinger,an American icon of crime who is considered pretty much the poster boy for gangster chic of the 1930s.

While this film looks and acts like an above the board straight shooting drama,I do wonder about the possibility of gangster parody flicks rearing up their goofy heads if Public Enemies leads to a revival of period crime films. It's a good subject for satire to be sure,but many times the results are a mixed bag of mirth.

A prime example of that is 1984's Johnny Dangerously,starring Michael Keaton as the title bad guy with a kid brother in the DA's office ready to take him down. To say that the humor is broad in this movie is an understatement;every cliche of a 30's crime saga is ponied up for not so subtle laughs.

It does have it's moments and one of the more amusing supporting characters is Danny Vermin,played with gleeful delight by Joe Piscopo. He's actually pretty believable as an ambitious henchman,so much so that any casting director looking for a career to bring back to life should think of him for a sturdier crime movie:

Sylvester Stallone tried his hand at gangster comedy in 1991 with Oscar,that had a crime boss promising his dying father that he would become a legitimate business man. That,of course,leads to plenty of hijinks that can be summed up by the most memorable line from Godfather III-just when he wants to pull out,they keep pulling him back in.

I actually saw the movie when it first came out in theaters and while it was entertaining enough,Oscar is really one of those comedies that you just have to be in the mood for. Otherwise,it may not strike you as all that funny. Stallone does give it everything he's got,but comedy is harder than it looks,folks:

The only successful gangster satire I know of is Bugsy Malone,written and directed by Alan Parker who took a bold approach to the material. He made the typical old school gangster movie into a musical and had it cast entirely with kids,featuring such future child stars as Jodie Foster and Scott Baio.

Bugsy Malone's criminal antics were made more family friendly as well,with cream pies as weapons and sarsaparilla taking the place of bootleg gin. This is such a silly sweet movie that it's a crying shame that it's not yet available on DVD(at least in the U.S.). There's no need for a remake but the original should be given some TV time for newer generations to see how musical parodies can be at their very best:

Public Enemies was number three on the box office list last weekend,and while it may be overshadowed by more gaudier film fare,the movie still has a chance at pumping up gangster style. With the increase from five to ten nominees to be chosen as Best Picture in the next round of Academy Awards,Public Enemies might make a strong comeback for the fall film season and if it does garner some Oscar gold,Hollywood will jump on that bandwagon quicker than TMZ on a Lindsay Lohan rumor.

If that happens,gangster parodies are sure to follow and for future reference, the jokes need to be well thought out and not simply based on suits and set design. The satirical devil is in the details,after all: