The juicy joys of Julie & Julia

On my list of Most Highly Anticipated Summer Movies is the adaptation of Julie & Julia,Julie Powell's foodie memoir about how she changed her life by taking on the challenge of making every recipe in Julia Child's classic Mastering the Art of French Cooking within a year and sharing her setbacks and triumphs in the kitchen to the world via her blog,The Julie/Julia Project.

I have fond memories of first reading J&J back in my bookseller days(it was my personal inspiration for starting this blog)and am glad to see this story get the big screen Hollywood treatment. Not to mention the revived interest in the life and times of Julia Child herself that all of this fan fare is creating. 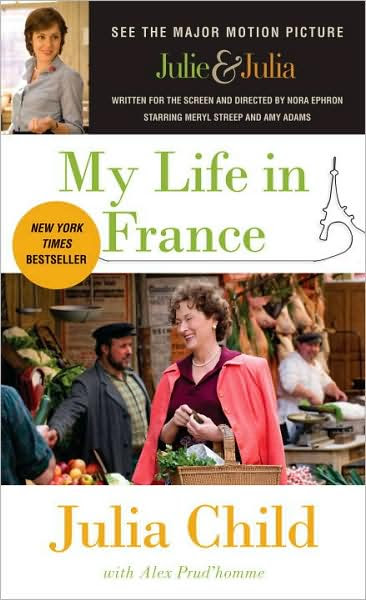 In addition to Powell's book,the filmmakers included Julia Child's own memoir of her early days of culinary education,My Life In France, into the screenplay.

Co-written by Alex Prud'homme,Julia talks about living in France with her newly wed husband Paul,who was sent there as part of a post WWII diplomatic artists' outreach program,and how she became fascinated with the way of life over there,plus started to develop her love of food.

She began training at the famed Cordon Bleu,insisting on not doing the standard housewife sessions but wanting to learn the true professional methods of cooking. She was the only woman in the class,but quickly was accepted by her fellow chefs and gained more confidence to pursue her interest in sharing her knowledge with a wider audience. 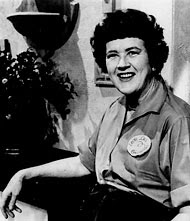 In reading Child's memoir(along with recently rereading J&J),the parallels between the experiences of both Julias are more obvious. They were women of a certain age(by the standards of their respective eras)who dared to tackle big challenges with one goal in common,to find a sense of higher purpose in their lives.

They also had some limited kitchen space(Child in her barely heated Paris apartment,Powell in a barely renovated Brooklyn loft)to try out their recipes at home. Each Julia also had the support of family and friends,who served as taste testers for every new dish.

Both Julias also felt the need to talk about their culinary passions on a major media stage,Child with her instructional TV shows,Powell with her blog and then later her book. While Powell hasn't had her own Food Network show yet,she's made quite a few media appearances even before Julie & Julia went to print. That makes her as well seasoned as Child was in that department and who knows,the FN might knock on her door with an offer.

While these two ladies never got the chance to meet face to face,I imagine that they would have had quite a lively conversation,perhaps over a hot stove as they whipped up the perfect chicken together: In the end,it's all about the book. The one link that binds the Julias to each other,the infamous Mastering The Art of French Cooking. Like many people,cookbooks never seemed to be anything other than instructional manuals for food to me. Both Julias have changed my mind about that.

Julia Child,in her memoir,talks about the cookbooks that drove her passion to know more about French cooking such as La Bonne Cuisine de Madame E. Saint-Ange and Ali-Bab's Encyclopedia of Practical Gastronomy. Those books,which she devoured eagerly,lead her to write her own that in turn caught Julie Powell's imagination and desire to pass the warmhearted wisdom of those words forward. Quite the circle of life there.

It just goes to show that you really shouldn't judge a book by it's genre. A whole unexpected outlook on the wider world can be seen thru the window of what might seem to be a small subject that totally expands your horizons in a delightfully delicious way:

MMmmm,just thinking about all of this makes my mouth and my mind water. I don't know if my budget will allow me to see J&J when it hits the theaters next week,but I wouldn't be surprised if popcorn won't be enough to satisfy the hunger cravings that the movie will be stirring amongst the audiences who do. You might want to eat a full meal before catching a matinee showing,folks. Either way,bon appetit to book and food lovers alike this summer at the movies:

I'm supposed to be getting a copy of Julie & Julia before too much longer. It sounds like a good read though I'm afraid I don't know very much about Julia Child (except the fact that she voiced a character in an animated movie I liked as a kid). However, I adore a good foodie book!