Sink your teeth into one of these Red Meat Reads One of the books I was able to get at this year's BEA was an advance copy of James Ellroy's September release,Blood's a Rover. This book is intended to be the final part of his "Underworld U.S.A." trilogy,which started with American Tabloid and continued with The Cold Six Thousand.

All three of them are set in the 1960s and interweave such real life figures as J. Edgar Hoover,Howard Hughes and Sal Mineo into the lives of the troubled schemers and behind the scenes players of his deadly dark vision of L.A. and American corruption.

This is the first time that I've read any of Ellroy's work;like many other lit fans out there,I enjoyed the film adaptation of L.A. Confidential but didn't really get into his books. They've been described as intellectual noir pieces,with no holds barred language and style. While the no holds barred part is correct(if you have any lingering P.C. qualms regarding your reading materials,consider any of Ellroy's cannon to be NC-17 and move on)and that while his writing is clever and clearly well thought out,it's not as inaccessible as one might have expected.

I'll have more of a full review of the book later this summer,but my main reason for reading it right now was the need for a change of pace. Just as I'm sure that some of the fellas out there like to read a romance novel or two to mellow out,I occasionally get a craving for an action packed,guns a-blazing,cool as Antarctic ice,tough with a slight chance of tender on the side,manly book,or as I like to call them, a Red Meat Read. 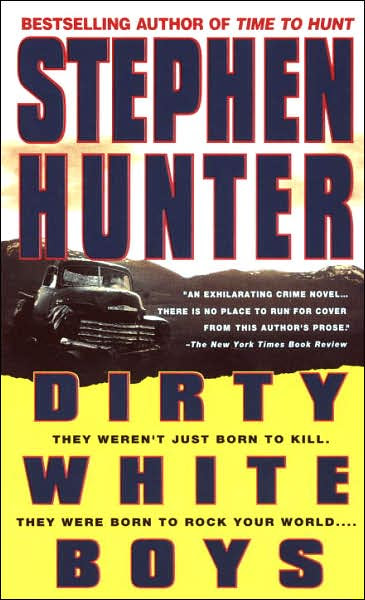 Most of my Red Meat Reads come when least expected. I took a chance on Dirty White Boys by Stephen Hunter when it came out in paperback and was pleasantly surprised by the raw impact it made.

Hunter is also a film critic(a great collection of his essays on that subject that I wholehearted recommend is Violent Screen)and the tale of three desperately dangerous men who break out of prison and the tormented cop who doggedly hunts them down has a strong cinematic flow to it.

In fact,if Rob Zombie is looking to make another movie that's not another horror movie remake,this book might be picture perfect for his off the wall talents. Lamar Pye and his cousin Odell would get along well with the twisted Firefly clan or have one hell of a fire fight(spoiler alert for the following clip for those who haven't seen Devil's Rejects-you have been warned): 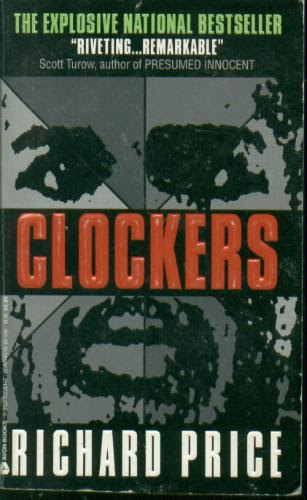 Clockers was a crossover literary sensation,taking Richard Price into more mainstream territory with his novel about Strike, a young drug dealer who strove to maintain his tough guy image to survive the streets and the homicide detective who was headset on proving that Strike had a hand in the murder of his more law abiding brother,Victor.

While the Spike Lee film version made too many deviations from the source material,it did bring many of the pivotal characters in the book to vivid life such as Rodney,Strike's charismatic mentor who may be a father figure one minute but can turn into a man of undiscerning menace in the next:

Vikram Chandra's Sacred Games takes an epic and international approach to the genre,as the dark underbelly of Mumbai's criminal kingdoms gets exposed to full view. Think of it as a Bollywood Godfather,only with more twists and turns than a minotaur's maze.

The most dominant players in the game are Inspector Singh,an honest and unappreciated police office and Ganesh Gaitonde,a crime boss who built his brutal empire with his own dark determination and ruthlessness. One of the best parts of the book is a confrontation between the two as the authorities are attempting to break down Gaitonde's stronghold,where he has isolated himself as a last resort. It's as classic as any gangster moment from a Bogart film:

You can't get any more red meat than a good old fashioned Western and Lonesome Dove fits the bill nicely there. While Larry McMurtry is still best remembered for such female friendly fare as Terms of Endearment,his saga of the dying days of the Old West showcases a rough and ready sensibility that can throw a sure handed sucker punch when called for.

Despite the numerous sequels and prequels written,Lonesome Dove always seemed to be just fine as it was already,without any other helpings of this old school story stew required. I'm sure that some of them are good reads,but that doesn't mean I need to read them. No disrespect intended,especially since Augustus McCrae is not someone you should be trifling with if you value your health:

No doubt some folks believe that stuff like this only appeals to our baser natures and should be avoided like the plague. While overdoing anything is not a good thing,I don't think that taking a dip into murky fictional waters is a bad idea from time to time. Examining that taste for the warrior instinct is the only way to deal with those rampaging energies and channeling them into something positive. Not to mention that kicking a little ass every now and then totally rocks: